The American and British first editions (published within a month of each other) are radically different, both as books and as texts, and the reasons for these differences offer concrete evidence of a fluid text and fascinating glimpses into Melville’s creative process, the demands of editors, and nineteenth-century book history.

Copy-right laws giving writers and publishers some degree of ownership of the works they printed were, during Melville’s lifetime, restricted to nations. As a result, writers of works in English on both sides of the Atlantic were vulnerable to the practice known as “piracy” in which unauthorized publishers reprinted their work without providing royalties. A much-lobbied-for international copy-right law—Dickens was particularly vocal on the matter—designed to protect writers from unauthorized reprints did not come about until the 1890s.

In the meantime, and to reduce the impact of the pirating of his publications, Melville followed what had become the standard practice of arranging for the near-simultaneous publication of Moby-Dick first in England and then the US. To do this, he had his novel typeset as a single volume in New York City in the summer of 1851 but withheld publication of it in the US until after the British version was released.

To publish the three-volume British version, Melville sent a set of the American proof sheets, which included some corrections and revisions of his own (for the sake of British readers), to Richard Bentley in London, who instructed Henry Milton to copy-edit the American sheets, adapting it to British usage and Bentley’s house style. Milton also expurgated the text in over 200 places. In going to press, Bentley’s edition famously omitted Melville’s Epilogue, in which we learn that Ishmael is the only survivor of the Pequod shipwreck. Much to Melville’s chagrin over the expurgation of some of the novel’s most memorable poetic prose, British reviewers (who did not have the Epilogue) were also quick to note the formal impossibility of the death of the novel’s first-person narrator. Also bungled in the British production is the placement of Etymology and Extracts at the end of Volume 3, instead of its place at the front of the single-volume American version. Also, the British version is titled The Whale; or, Moby Dick; whereas the American title is Moby-Dick; or, The Whale. The Epilogue omission, Etymology / Extracts misplacement, and title discrepancy are likely to have been the consequence of confusions arising from the shipment of proofs to England. The British version appeared in October 1851; the American in November. Melville’s proof sheets with their corrections and slight modifications (which came too late in the process to be added to the already printed but not distributed American text) and Milton’s copy-editing, revisions, and cuts have not been located. They can only be discerned through collation, made accessible through editing, and analyzed through revision argumentation

The difference in title in the British and American titles reflects a late change of mind on Melville’s part. When he sent his proofs to Bentley the novel was simply The Whale, but an undated draft of a letter from Melville’s brother and literary agent Allan Melville to Richard Bentley, requesting a title change to Moby-Dick; or, The Whale, came too late for Bentley to make the change; he had already advertised the original title. Exactly when Melville changed his mind is not certain. But the appearance of “The Town-Ho’s Story” (Ch. 54) as a pre-publication excerpt from “The Whale” in the October 1851 issue of Harper’s New Monthly Magazine indicates that Melville had held onto this title into late September, about the time that Bentley had already arranged for his early October advertisements of The Whale. Nevertheless, Bentley was able to insert a half-title page, in Volume 1 only, that reads The Whale; or, Moby Dick. The subtitle omits the hyphen in the American title Moby-Dick. Even this difference has meaning, for in modern usage—both scholarly and now popularly—the hyphenated Moby-Dick designates the book; the unhyphenated “Moby Dick” represents the white whale.

In light of these differences, modern scholars agree that the American edition text (though it came one month later than the British) more fully represents Melville’s intentions before he released his text to printers, editors, and publishers. That said, the British text mingles Melville’s last-minute revisions with the British expurgations, all of which have interpretive value especially regarding Moby-Dick’s first, transatlantic readerships.

Readers can inspect the differing physical features and print texts of the American and British first editions in our side-by-side display above. To move to the front and back matter of each book, or to the beginning of a chapter, select the appropriate section or chapter number and title in the drop-down menu below each edition. Users can also flip page by page through either edition by clicking the left or right arrow on the page frame; they can skip ahead or back by clicking the dots below the frames.

These two books constitute the physical evidence of Moby-Dick as a fluid text. However, a closer inspection of the works textual fluidities requires digital collation of the texts of the two versions, a process discussed in the following introductory link. Readers can also find expurgations discussed in revision annotations in MEL’s Moby-Dick Reading Text.

MEL’s images of the first American edition of Moby-Dick and of the first British edition of The Whale are digitally reproduced from copies—with the call numbers PS2384.M6 1851 and PS2384.M6 1851a v.1-3, respectively—in the Clifton Waller Barrett Library of American Literature, Herman Melville Collection, in Special Collections of University of Virginia Library. The texts of the American and British editions used for MEL’s collation of the two versions were transcribed with minimal TEI coding by Aptara, Inc. from these two copies. 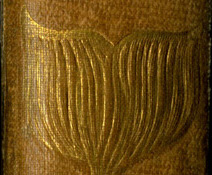